“Vigüela is a Toledo-based outfit of singers, guitarists and players of castanets, tambourines, shearing scissors, cowbells, sieves, the lute-like bandurria medieval fiddle…. You name it… they sound like a wandering tribe who have investigated and rescued the soul music of inland Spain.” **** Songlines 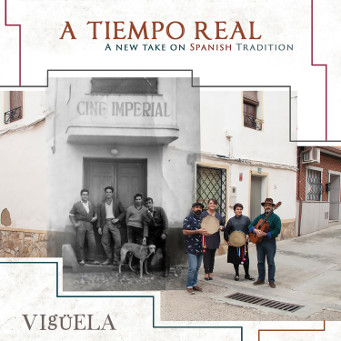 ‘A Tiempo Real’ is the new album from the traditional Spanish folk band Vigüela. It is a double-disc of almost 100 minutes of carefully arranged traditional folk songs and is as much album as a lively preservation project. ‘A Tiempo Real’ is a cultural contribution to Spanish folk music as performed in village life in homes, festivities and celebrations in the province of Castilla-La Mancha and beyond.

Vigüela perform their music and songs on folk instruments and kitchen implements such as two small Spanish guitarros manchegos, castanets, frame drums, the friction drum or zambomba, folk guitars, triangles, the bowed 1-stringed rebeq, lutes, jars, bottles, mortar and frying pans. ‘A Tiempo Real’ travels deep into the heart and soul of village life, uncovering traditions, values and stories of life through music and song. In the Spanish folk tradition, music didn´t belong on the stage: it was music from the village streets.

‘Ronda’ is the Spanish custom of walking and singing in the street, completely unplugged with no distance between the artists and the public, allowing for much interaction. ‘El Ramo / Palillo verde / Allá en La Habana’ (The Bouquet / Little Green Stick / Over there in Havana) is one such ronda, traditionally sung on Christmas Eve in El Carpio de Tajo. ‘Over There in Havana’ includes couplets that were brought back by soldiers in the war from Cuba at the end of the 19th century.

Songs from Vigüela’s home village of El Carpio de Tajo feature the most on ‘A Tiempo Real’, such as the beautiful melody in ‘Echa la soga al barco’ (Throw the Rope to the Boat). This belongs to the repertoire of music built around the friction drum or zambomba. In El Carpio de Tajo, only the first verse of the song was known, so Vigüela created two more verses. The ‘deaf’ malagueña dance ‘Malagueña sorda de Javi de Nerpio’ is performed by guitarist and special guest, Javier Gómez García (Javi de Nerpio), recorded with guitarro manchego, castanets and tambourine.

There are some surprises in village life on ‘A Tiempo Real’, such as fandangos coming to the door and a demon coppersmith with a glass eye as found in ‘El demonio el calderero’ (The Demon Coppersmith). ‘A mi puerta llaman por fandangos’ (They Come to my Door in Fandangos) is the track that perhaps best sums up the spirit of ‘A Tiempo Real’ – a fandango played on guitar with the melody starting on the first beat, typically performed in El Carpio de Tajo and in the nearby mountains of Toledo. As the lyrics of ‘A mi puerta llaman por fandangos’ describe,

Don’t pay attention to my grace/that didn’t come from heritage/listen to the songs/all of them have a saying.”

Marcela Palomo, both a local singer from El Carpio de Tajo and mother of María del Rosario Nieto Palomo – Viguela’s lead singer – taught Vigüela the much-loved song of the region known as ‘El pájaro ya voló’ (The Bird has Already Flown). While many versions of ‘El pájaro ya voló’ have evolved over the years, this is performed in the traditional way in the villages and farms of Castilla-La Mancha.

Without Vigüela taking the time to arrange and record ‘Flor del virulé’ (Flower of Virulé), it would be a song that remained out of public view. Sung predominantly in Campo Arañuelo, north-west Toledo, ‘Flor del virulé’ is usually sung at Christmas time.

Traditional dances from around Spain are also found on ‘A Tiempo Real’, such as the seguidilla on ‘Pandero arroyano por seguidillas’ (Seguidillas with Frame Drum in the Style of Arroyo de la Luz). Arroyo de la Luz lies in the province of the Cáceres, famous for musical couplets played on a frame drum. Vigüela spent time working with melodies collected by Don Manuel García Matos and Alan Lomax from the 1950s. The group have been careful not to imitate the way of singing from Arroyo de la Luz, but instead use this style of playing seguidilla with their own Toledo expressions.

‘Malagueña a tres del dos’ (Malagueña in Trios of Two) is performed in three different styles: one from the mountain range of Segura by Javier Gómez García, and the other two, newly created by María del Rosario Nieto Palomo and Juan Antonio Torres from El Carpio de Tajo (Toledo province).

Vigüela are very much a face-to-face band as audiences at WOMAD UK 2017 will testify. Vigüela was invited to perform on the BBC Radio 3 stage at WOMAD where they captivated audiences and went onto perform an intimate session at Taste The World and taught WOMADians traditional Spanish dances.

‘A Tiempo Real’ follows on from the success of their first international release, ‘Temperamento’ (ARC Music), as Le Canard Folk reviewed:

“Unlike many Spanish discs, it is in respect of rural traditions, while keeping alive: polyrhythms, melisma, free passages. All interpreted with sincerity and sensitivity, speaking of love, milling, working the fields, cows ... Jotas, seguidillas, fandangos, gañanas in all sobriety and purity.”

The journey for ‘A Tiempo Real’ began with guitarist and producer of the album Juan Antonio Torres who says this about the album’s opening rebeq-driven track ‘Arrímate, pichón, a mí’ (Come Close, my Pigeon, to Me):

“The traditional repertoires don’t belong to a specific time or place. The same songs are performed in different ways, depending on the moment or the time of the year.”

Whether live or recorded, Vigüela are musical gravity. ‘A Tiempo Real’ is a record of preservation, pride and passion, released internationally through ARC Music on 24 August 2018.