Minyeshu Kifle Tedla has been invited to perform a very special song at London’s Africa on the Square Concert at Trafalgar Square on Saturday 27th Oct. Africa on the Square 2018 is organised by the Mayor of London, Sadiq Khan, as the closing concert for the UK’s month- long celebrations for Black History Month (Oct 1 – 31st). 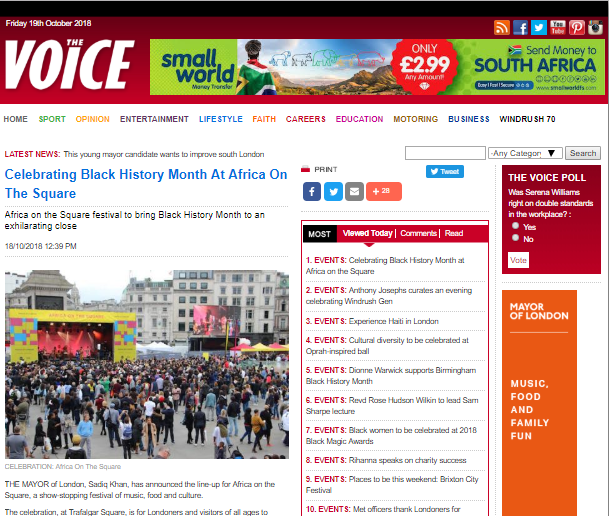 Minyeshu will be performing a special track from her new album ‘Daa Dee’ released internationally through ARC Music on 26th October. Minyeshu has carved an impressive name for herself in the Netherlands, Belgium and Germany as an exciting and dynamic world music vocalist and performer. Minyeshu was part of an international star line up at the 2nd Pan-African Festival in Algeria with Salif Keita and Youssou N'Dour and, in Senegal, performed at the launch of the World Festival of Black Arts (Festival Mondial des Arts Negres) where she joined African music ambassadors such as Angelique Kidjo, Baaba Maal and again, Youssou N'Dour.

Minyeshu was born under the Ethiopian sun in the city of Dire-Dawa, later moving to the capital, Addis Ababa, where she joined the National Theatre of Ethiopia aged 17. There she discovered ‘the father’ of Ethio-jazz, Mulatu Astatke, and choreographer Tadesse Worku. Subsequently, Minyeshu had the golden opportunity to share the stage with some of Ethiopia’s great musical icons including Mulatu Astatke and singers Mahmoud Ahmed, Tilahun Gessesse, Bizunesh Bekele and many others. With the crème de la crème of the Ethiopian music scene, Minyeshu toured in over 35 countries and starred in ‘People to People’ which is recognised as one of Ethiopia’s greatest music and dance productions and is flying in from The Netherlands for Africa on the Square.

Minyeshu joins an all-star cast of artists including “beats by Beeogo Yinga (Burkina Faso), African dance music from Kodjovi Kush & Afrospot All Stars (Togo) and the vocal talents of Namvula (Zambia).” Minyeshu’s performance is at 2pm followed by a meet & greet at The Voice stand from 2:45 pm.  For a full list of artists and to read the festival’s official press release, please click on this link to The Voice Newspaper, the official media partner for Africa on the Square 2018: https://tinyurl.com/y953efyc

“Minyeshu produces a heartwarming, sometimes giddy swirling, testament that is exciting, diverse and above all else, dynamic. Her voice is flawless, channeling our various journeys and travails but always placing a special connection to those Ethiopian roots." Monolith Cocktail/ Dominic Valvona

“A very powerful album that retains the essential musical elements of her Ethiopian heritage while finely mixing in European production values and instrumentation." AfroBase/John Warr

“… listen to any of the 13 songs on “Daa Dee” and find yourself transported … to a steamy jungle fireside, a theater, a concert hall or lasting-impact incidents from your own life, depending on your mood during the listening experience … the songs gently point to all those scenarios….” World Music Central/Arthur Shuey