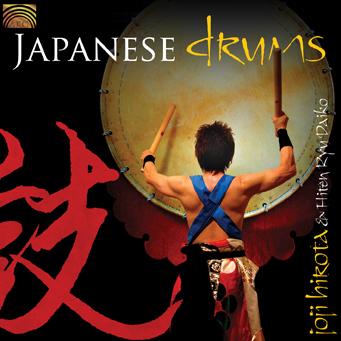 Music by legendary Japanese taiko drummer, London-based Joji Hirota, is to feature in ‘Silence’, directed by Academy-Award® winning Director, Martin Scorsese. ‘Silence’, distributed by Paramount Pictures, is scheduled for global release in January having premiered at The Vatican on the 29th November. ‘Silence’ will be released in the UK on the 1st January 2017 and in the USA on the 6th January. The screenplay was written by Jay Cocks and Martin Scorsese. ‘Gangs of New York’ in 2002 was also a Jay Cocks/Martin Scorsese partnership winning a Golden Globe for Best Director.

‘Silence’, based on the novel by Shûsaku Endô, is the story of two Jesuit priests, Father Sebastião Rodrigues (Andrew Garfield) and Father Francisco Garrpe (Adam Driver) who travel to Japan to find their mentor Father Cristovao Ferreira played by Liam Neeson, only to find their journey beset with danger, persecution and extreme trials of faith.

Martin Scorsese has been nominated for eight Best Director Academy Awards and won Best Director for ‘The Departed’ in 2007. Scorsese’s film ‘Raging Bull’ (1980) is hailed as a masterpiece of modern cinema. It earnt Robert De Niro an Oscar for the lead as boxer Jake LaMotta and received a staggering eight Academy Award nominations. Scorsese directed ‘Hugo’ in 2011 which won five Academy Awards.

With Japan as the prime location for ‘Silence’, it is fitting that music from master Japanese taiko drummer, Joji Hirota, has been selected to feature in the film. The selected track is ‘Kin no Mai’ from the album ‘Japanese Drums’. ‘Kin no Mai’ features the ‘kin’ prayer bell frequently used in Japanese temples and also Tibetan temples where it is referred to as ‘the singing bowl’. Kin are played in Buddhist temples before, during and after the ceremony to help purify the people and the air surrounding them.

As Joji Hirota says in his words,

‘The origins of Taiko music lie in old Japanese folk music, Noh theatre, Kabuki, Buddhist and Shinto religious music, but since the 1960s Taiko drumming as a performing art has progressed extensively to this day.

I have endeavoured to create Taiko music in a new contemporary style, trying not to lose the grace and high energy of the traditional Taiko music from this heritage, and I believe I have achieved this with my Taiko team.’

The musicians on ‘Kin no Mai’ feature Joji Hirota on kin, a wind gong and an ‘o-daiko’ (literally a ‘big fat drum’) which can be found up to ten feet across. Akinori Fujimoto performs on the smaller ‘shime daiko’ high-pitched drum used in traditional Japanese theatre and Yoshinori Hayashi plays the large Japanese temple drum known as ‘miya daiko’ which is often played by monks to ‘cleanse’ the air.

Joji Hirota is a composer, Taiko drummer, multi-instrumentalist, shakuhachi player and singer. Born in Hokkaido in Japan, Joji studied percussion and composition at the Kyoto Arts University and was invited to come to Europe as a musician with the Red Buddha Theatre and also as percussionist for the Lindsay Kemp Dance Co., where he later became musical director. Hirota wrote and performed the music for their production of Onnagata which won the Time Out Award for the ‘Best Dance Company’.

Joji Hirota has performed and toured with leading world and folk musicians and founded Trisan with Guo Yue and Pol Brennan (Clannad). They toured Europe, Canada, the USA and Japan, and in 1993 Trisan’s first recorded album was nominated No.1 for ‘Best Contemporary Instrumental Music’ (Tower Records, NY).

Joji also founded the group Joji Hirota and Taiko Drummers, a highly regarded and well-established traditional and contemporary Taiko drumming group, who have performed worldwide from the USA to New Zealand. Joji is also a WOMAD UK favourite star performer and was one of ‘Top 100 Japanese Respected In The World’ is a Newsweek poll vote in 2007.

ARC Music has a growing list of top movie placements including two James Bond films: Casino Royale and Skyfall, as well as The Dictator; Indiana Jones and The Kingdom of the Crystal Skull; The 40 Year Old Virgin; Burn After Reading and many other leading Hollywood movies. ARC Music ranks #3 in the WOMEX Top Labels for 2016 and was established in 1976 to preserve the ethnic music of world cultures, and to distribute world and folk musical globally.