DVD: Film made in 1969, presented by Yehudi Menuhin 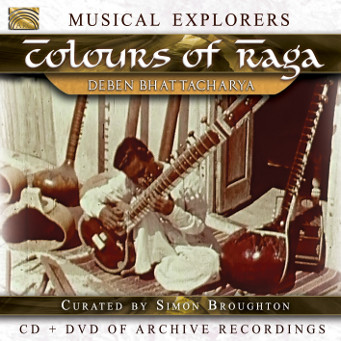 ARC Music is proud to release the first in a new world music series: ‘Musical Explorers: Colours Of Raga’ as recorded (CD) and filmed (DVD) by the late ethnomusicologist Deben Bhattacharya (1920-2001). 'Musical Explorers' seeks to document the historic works of musicians and ethnomusicologists who brought attention to the burgeoning world music scene in the 20th century. Director of ARC Music, Julia Beyer, is well-known for leading the label into new, successful world music initiatives such as The Ultimate Guides from Spain, Ireland, Scotland and most recently ‘The Ultimate Guide to English Folk’ curated by Jon Boden.

Julia Beyer invited Editor-in-Chief of Songlines, Simon Broughton, to curate the first in the new ‘Musical Explorers’. Simon Broughton is both author and film-maker whose work ‘The Rough Guide to World Music’ Volumes 1 and 2 is the reference book for global sounds. Regarding this new project, Simon writes: “This new Musical Explorers series …  makes available, often for the first time, a valuable range of historical films and audio recordings gathered from all over the world.”

Ragas –  the most characteristic form of classical music – actually derive from the Sanskrit word ‘ranj’ meaning ‘to colour’. As Simon Broughton writes, ragas have “… a melodic structure, built up by a set of specially selected notes, a definite scale… A raga is played or sung at its appropriate hour of the day or night, for each raga represents a special mood… In India, every hour of the day makes itself felt as the sun gains its strength, therefore the ragas of the day are different from the ragas of the night. The ragas of the night are often suggestive of love and tenderness, serenity and contemplation.”

Most of the 6 ragas on ‘Musical Explorers: Colours Of Raga’ were recorded in 1954 and each are suited for a particular time of day including ‘Todi’, an early morning raga, through to ‘Kedari’ which is best played after seven o ‘clock at night. The ragas on ‘Musical Explorers: Colours Of Raga’ are performed on a variety of traditional Indian instruments such as sitar, tabla, bansuri and the rudravina which Simon Broughton calls ‘the mother of all stringed instruments of modern and ancient India’. There is also ‘Bageshri’, a love song sung in Hindi and recorded in Benares in 1954.

‘Raga’, the film that accompanies ‘Musical Explorers: Colours Of Raga’, was made in 1969 and presented by none other than Yehudi Menuhin, during the pioneering days of TV documentary film-making. It is in fact the earliest surviving Deben Bhattacharya film as Simon Broughton writes,

“You’ve got to remember that this was nearly 50 years ago and fairly early days in TV documentary making. The filming is unadventurous, the message educational, and the erudite voice-over very much of its time. But in our digital age, when you can see a sitar or hear a raga in an instant, it’s easy to underestimate how ground-breaking a film like this was. Short of meeting Indian musicians, how else could you encounter information like this? In the 1960s this was an unknown world…”

Deben Bhattacharya’s early albums were released by a number of record companies the world over including Argo (UK), Boite à Musique (BAM) (Canada) and Musicdisc (in France), Phillips (in the Netherlands) and Caprice (in Sweden). Over the last two decades, ARC Music has been responsible for releasing many exclusive field recordings from Deben Bhattacharya’s vast collection. These include: ‘Bauls of Bengal’ (2005); ‘Sufi Songs of Love, from India and Iran’ (2013); ‘The Music of Uzbekistan’ (2013) and ‘Murshidi and Sufi Songs’ (2015). Deben Bhattacharya produced albums from over 30 countries in Asia, Europe and the Middle East. ‘Musical Explorers: Colours Of Raga’ will be released globally through ARC Music on 23rd June 2017.