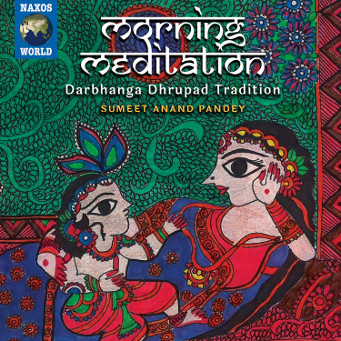 Sumeet Anand Pandey is a 10th generational Dhrupad singer, a genre of Hindustani classical music that dates back to the 15th century and the most ancient form of Indian classical music still alive today.

There is no Indian heritage that has lasted the test of time this far, based on original documentation.Originally for meditative, spiritual and religious purposes, the ancient Dhrupad writings are often in praise of the Almighty.

As the artform progressed, it was adopted by more confined groups and eventually became popular in Courts of Mughal Emperors and even among the masses.

Morning Meditation is an album of alluring beauty, focusing on the Darbhanga tradition of dhrupad, a major style that originated in the 17th century. The traditional hand-painted artwork on the album cover portrays the mother Yashoda’s feelings of joy upon seeing baby Lord Krishna early in the morning.

Ahir Bhairav is a morning rāga with a meditative and devotional feel. Over the soft drone of tānpura, the recital begins in a relaxed movement over the notes of the rāga, not fixed in their arrangement, yet following a systematic unfolding.

Slow tempos are interspersed with spontaneous improvisations in melody and meter, using techniques that are specialties of Darbhanga Dhrupadtradition.

Sumeet Anand Pandey sees himself as a progressive traditionalist, and that is true of his musical expressions as well. Born to an illustrious lineage of dhrupad vocalists from the Darbhanga tradition, he was privileged to grow up in a musically rich atmosphere.

Morning Meditation is Sumeet’s personal contribution to the ancient and revered artform.