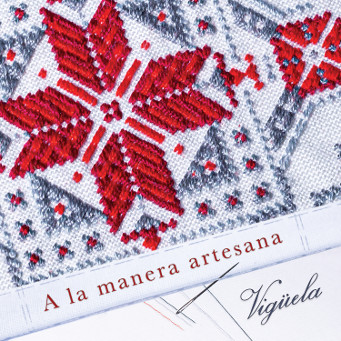 Spanish folk quintet Vigüela have a new album to celebrate, A la manera artesana, ‘In the artisan way’. A bold blend of Spanish songs and dances from the pueblos (villages), farms and rural ciudad (cities) in Castilla-La Mancha. Preserving time-honoured rhythms and vocal melodies of the traditional songs and dances that were first sung there, A la manera artesana is a definitive folk dance and songbook of rural Spain, a well-crafted journey through the music of the terrain featuring acoustic and a cappella recordings.

“They sound like a wandering tribe who have investigated and rescued the soul music of inland Spain.” -✰✰✰✰ Songlines

In their artisan way, Vigüela work their craft using the raw power of their voices, “the strength of the voices of Carmen Torres Delgado and Maria del Rosario Nieto… they could sing to a whole village just from their front porch.” – Elsewhere, NZ. Accompanied by guitars, the friction zambomba drum, the one-stringed rebeq, clapping, castanets, some wild percussive instruments and a whole lot of respect for traditional rhythms and vocal melodies, Vigüela are the guardians and keepers of the old ways. They preserve traditional songs and dances with their performances, videos and recordings over the last thirty years. Their music is characterised with instinctive pride and power, they need no reliance on special effects or showy spectacles to create an impact.

A la manera artesana unfolds like a well-planned journey from the Toledo mountains to the western branches of the Cuenca hills, opening with a powerful fandango to celebrate nature and love on ‘Estrellitas matutinas’ (Morning Stars), which releases as a single on 7th January 2022. Along the way we meet the stories of hill-dwellers, dressmakers, conscriptees and married couples, the traditional practice of ‘running of the bulls’ and of course, respect to beautiful artisan crafts.

The Toledo town of Lagartera is famous for its decorative artisan embroideries and vivid traditional costume-making, which has made the cover of VOGUE. It is here that band leader Juan Antonio chose the cover emblem for A la manera artesana which includes the embroidery of the band’s name. Created at Arte del Bordado by local needleworker Maria José, this is a traditional emblem from Lagartera made with a craft that was passed down to Maria by her mother and grandmother.

Vigüela joyously and with the warm-hearted spirit of Spanish culture round up family members and friends to perform their songs with them with unmistakable sincerity and passion. They continue to garner local respect and international acclaim, not only in Castilla La-Mancha but widely across Europe and abroad, “Vigüela is quite special in this sense. They have found an audience in both rural and urban Spain. For the latter, they are like a window on a world… ” – Simon Broughton